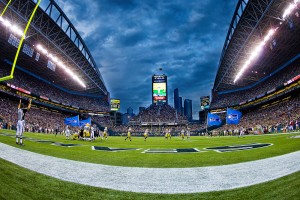 Let’s face it, there’s a certain kind of stereotype we all think of when we think of people who are into meditation: a modern-day hippie who shops at farmers’ markets, wears second-hand clothing made from recycled burlap, and spends their free time rescuing baby seals and listening to esoteric eastern music. Of course, this person doesn’t really exist — at least, it’s unlikely — they’re really just a cartoon-like parody we’ve picked up from pop-culture and watching too much TV.

In all reality, people who meditate are just ordinary people. They’re the same types of people you come across in your day-to-day life. In fact, you might regularly meet people who meditate, you just don’t know it. Your boss, your co-workers, your physician, your mechanic, etc… any of these people could be regular meditators. To illustrate this point even further, I’d like to share with you some unlikely meditators.

The U.S. Marines Corp pretty much contradicts everything about the stereotypical meditator: they’re not big on individualism, they’re trained and able combatants, and they probably don’t buy their groceries from the local farmers’ market; however, it’s not as if they’re interested in meditation because they started 60s psyche-rock. No, the marines are interested in meditation because it can help their soldiers cope with the stress of being in the military, and can even help with the prevention and treatment of serious mental conditions that soldiers are prone to, such as PTSD.

Once again, we find a contradiction of interests. After all, professional footballers pretty much gets paid to injure people. Sure, that’s not necessarily their intention, but that’s what inevitably ends up happening when a 300 lb. athlete rams his armor-plated head and shoulders into another guy at full running speed. Most people who finish a relaxing session of meditation don’t then immediately get up to play a full-contact sport, but that didn’t stop the Seahawks coach from bringing in a sports psychologist to teach meditation to his players. The meditation was not mandatory, but 20 of the teams’ players took it anyways.