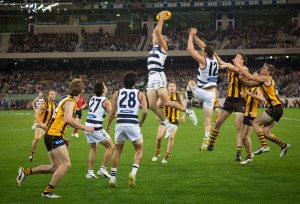 If there are any Australian football fans out there, you might be interested to know that Melbourne has adopted meditation as part of their regular training routine. The decision to incorporate meditation into their training regimen was implemented by their new coach, Paul Roos, who wants the team to find inner peace before they head out onto the field.

Australian football is neither European football (soccer) or American football. It’s kind of like a mix between rugby and soccer. It’s a tough sport and dangerous to play. The players and coaches aren’t the kind of guys you might typically associate with meditation, much in the same way it might be difficult for you to imagine a pro American footballer peacefully sitting with his eyes closed, listening to whale songs. Nevertheless, the team is embracing meditation because they realize the benefits.

The decision to have the team start meditating did not come from Roos alone, and it’s not as if he just happens to be some new-age guru type who wants to try out all sorts of experiments on the team. Before officializing the choice to go forward with the meditation training, Roos consulted an elite performance manager named Dave Mission who agreed it would benefit the team.

The team’s manager, Josh Mahoney, also supported the decision, and had this to say about it: “We just thought with the ever-increasing and stressful environment, that it was important that our players learn some techniques to relax and escape from football, and meditation is certainly one of these techniques or tools they can use.”

The players seem to be enjoying the new change, as well. After their first session, Midfielder, Christian Salem, told AFL.com.au, “That was great to do something different and really relax.”

Perhaps this will spark a trend throughout the AFL and eventually other major league sports throughout the world. Many American athletes have already discovered meditation, and that number seems to be growing. Who knows, perhaps in the not-to-distant future, sports and meditation will become a package deal, much in the same way it has already become synonymous with martial arts.