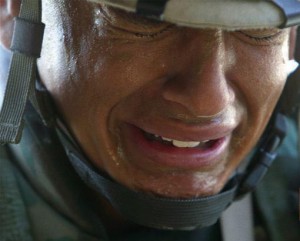 PTSD — post traumatic stress disorder — is a topic that gets discussed quite a lot on this site because it is such a prevalent problem and devastating disorder. It is estimated that of the more than 2 million soldiers who have served in Iraq, thousands of them are likely to be suffering from PTSD. PTSD has numerous unpleasant, and even haunting, symptoms, such as depression, anxiety, nightmares, flashbacks, and fits of rage. For decades, modern medicine has treated PTSD symptoms with drugs and therapy, but those treatments have not always been very successful. Now, more and more veterans are turning to meditation as a means of treating their PTSD.

Last week the Washington Post published an article on this subject. It covered the research of Elizabeth Stanley, a former military intelligence officer, and her colleagues who work in the fields of psychology and neuroscience. They began doing research in 2010 to determine if mindfulness meditation could have any positive effects on soldiers and veterans suffering from PTSD. Their research concluded that mindfulness meditation did in fact reduce feelings of anxiety and other “negative emotions” in soldiers, which indicates it could also be highly effective for treating veterans with PTSD.

The researchers split up 60 marines who were undergoing two months of intensive training before being deployed to Iraq into two groups. One of the groups received mindfulness meditation training and was instructed to meditate for 15 minutes a day. The other group did not meditate. After two months, the meditation group reported much lower levels of stress and anxiety.

The article also highlighted the story of a marine who was returning home after an 8-month tour of duty, and was suffering badly from combat stress. Del Cochran is a Marine medic, who served 8-months in Iraq in 2004 before returning home to less than ideal circumstances. Cochran reported excessively consuming alcohol, having problems with his marriage, and feeling constant anger. He said he was skeptical of meditation when he began, not thinking it would or could work. But now, Del Cochran, 50, is still meditating 15 minutes a day, every day. He was quoted by the Washington Post as saying, “For me, meditation was a lifesaver,”